Posted by Acoustics First in Absorption, Multipurpose Rooms, Product Applications, Products on May 30, 2019

Hidden Creek Home Owners Association contacted Acoustics First® to remediate the poor acoustics of their clubhouse meeting hall. Hard surfaces and tall ceilings contributed to excessive reverberation and poor speech intelligibility. The HOA board wanted to address the acoustics of the meeting hall during an upcoming renovation of the space.

Hidden Creek HOA submitted pictures and plans of the clubhouse to design consultant Cameron Girard. After calculating the amount of absorptive treatment needed to obtain an ideal reverb time, he submitted a treatment proposal with Sonora® panels that would ensure a significant acoustic improvement. Cameron provided detailed renderings to the board, allowing them to better visualize the layout of the panels as they reached a final decision on treatment. 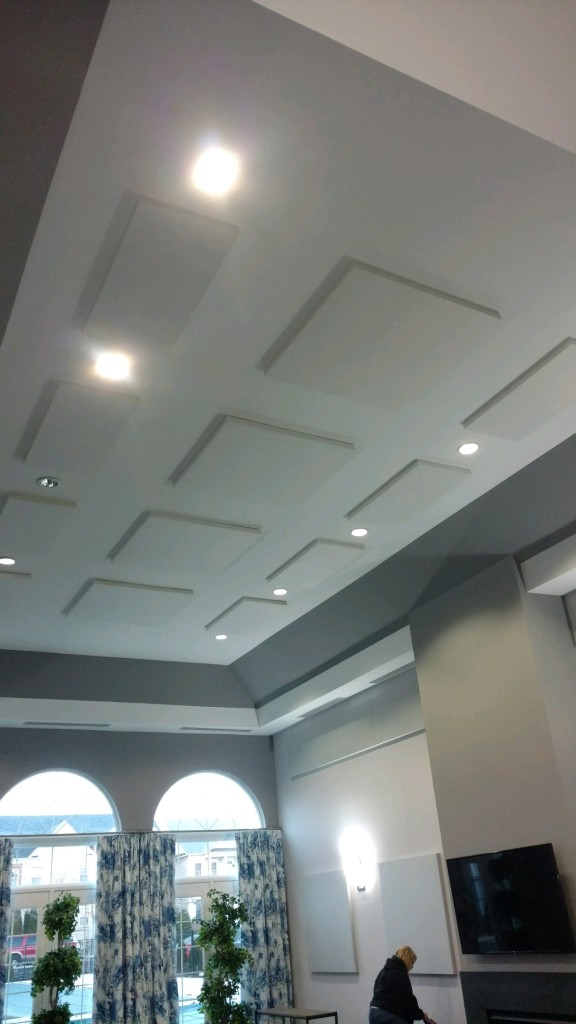 A single skilled contractor installed the panels in a few days, leaving Hidden Creek residents with a much more suitable acoustic environment for meetings and small group gatherings.

Posted by Acoustics First in Absorption, Press Release on February 22, 2018

Here’s an array of our Sonora® Acoustical Wall Panels installed on an office wall. You may notice that the colors here really pop! That’s the Guilford of Maine® Whisper line. Whisper is an excellent fabric choice for Sonora panels if you’re looking for something a little more Vivid. You can add some visual life to your space, while taming it acoustically. Over 20 colors available.

What can you say about the tremendous benefits of acoustical panels for churches that hasn’t already been said?

Here are a few pictures from another fantastic installation.

These Sonora® Wall Panels were specified by Cameron Girard in our technical sales department.

For anyone new to the world of acoustics, there is a multitude of terms, coefficients and numbers that are thrown around.  This flood of information can seem intimidating, especially to beginners. In this series, acoustician Cameron Girard of Acoustics First® hopes to help you distinguish between what’s useful and what’s not.

As I discussed in my previous article, the best way to compare the performance of sound absorbing panels is by referencing the Sound Absorption Coefficient (SAC) and Noise Reduction Coefficient (NRC). However, these coefficients are often used as marketing tools. Be on the lookout for companies that list absorption coefficients and NRCs without mention of a particular testing standard or mounting method. It’s vital to check for this information, as direct comparisons to competitors and other materials can only be made if their testing procedures are the same.

The sound absorption of a material that covers a flat surface not only depends on the physical qualities of the material but also on how the material is mounted during installation. The mountings specified in laboratory tests are intended to simulate conditions that exist in normal use, such as direct wall mounting and installation into a ceiling grid. 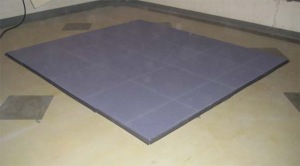 Many materials for treatment of walls or ceiling are tested using what is called Type ”A” mounting. Type ”A” mounting means the test specimen was placed directly on the test surface of the reverberation chamber. Lay-in ceiling tiles, on the other hand, are often tested using ”E400” mounting. The ”E” designates a sealed air space behind the specimen (simulating  the air gap between a dropped tile ceiling and the structural ceiling) and the number after the ”E” is the depth of the airspace in millimeters. The airspace behind the acoustic material affects the sound absorption by acting as a bass trap. The deeper the cavity behind the panels is, the lower the fundamental of the “trapped” frequencies will be.

To see what this look like in terms of actual numbers, let’s take a look at how different mounting methods effect the sound absorption coefficients of Acoustics First’s HiPer® Panel (a low-profile, composite absorber/diffuser panel).

Since the HiPer® Panel can be used effectively in multiple applications; we had it tested in accordance to the two most-common mounting procedures, Type E-400 and Type A. The results of the laboratory tests are as follows:

As you can see from the chart, the sound absorption coefficient at 125 Hz varies greatly between E-400 mounting (SAC of .43) and Type-A mounting (SAC of .09). If mounting the HiPer® Panel in a ceiling grid, with a sizable airspace, you can expect significant low-frequency absorption, but mounting it on a wall (Type-A) will result in much less absorption at 125Hz.

Other mounting methods are available, but are not used as frequently. Here are some of the basic mounting designations (See ASTM E795 for more information.)

Type B mounting – Test specimen cemented directly against the test surface. Type B mounting is intended to simulate acoustical ceiling tiles or other sound-absorptive products adhered to a hard surface with an adhesive.

As we’ve discussed, acoustical data can vary greatly depending on the mounting method used during testing. Acoustics First tries to include as much information about testing procedures as possible, because we feel an informed client makes the best client.

Contact Acoustics First for your all your sound control needs! 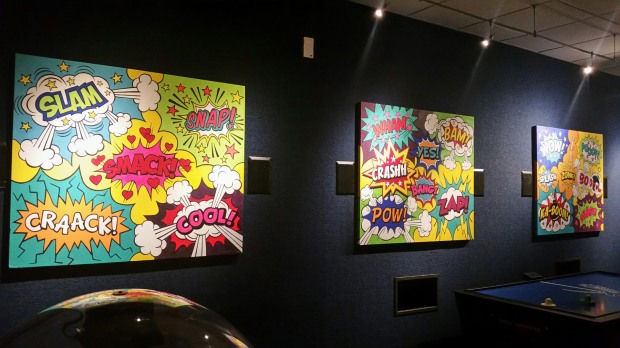 Hello Folks! We decided to share a few more eye popping pictures of our popular ToneTile™ product line. These paintable/printable panels can make for some of the most interesting and exciting visual accents to a space, in addition to their acoustical benefits. These painted ToneTiles™ were part of a larger installation for an Athletic Club in Delaware.

We think they turned out great!