Students at the Frost School of Music had an “ear-opening” experience when their Computational Psycho-acoustics class was lectured by Jim DeGrandis of Acoustics First last month.  The topics ranged from engineering to human perception of ultrasonic frequencies. The students were exposed to concepts and demonstrations of ultrasonic frequencies which have been modified in ways to make them audible, and ultrasonic anomalies affecting the audible range in ways that are very blatant and obvious.

One of the most stark examples of “audible ultrasound” being the demonstration of a Parametric Speaker, which modulates the ultrasonic carrier to produce very directional audible frequencies. 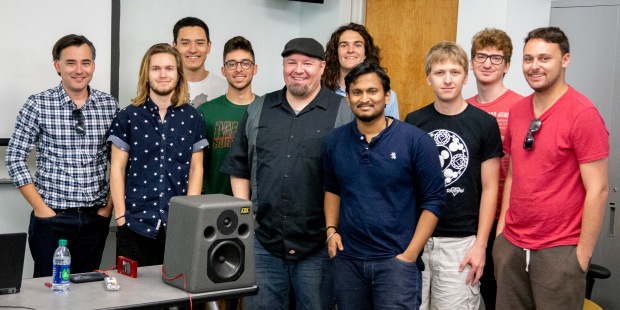 Jim also spoke at the student forum about misconceptions of what it really means to be “in the industry” …and did an encore demo of the Parametric Speaker – which had apparently been such a novel experience for the Psycho-Acoustics class that they ‘demanded’ it be experienced again by a wider audience. (and it was just plain fun!)