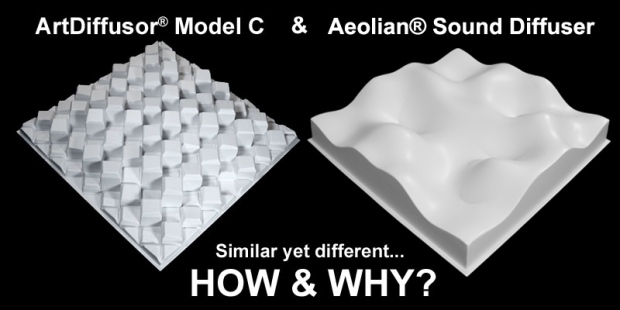 For this installment of “Similar, yet different” we look at The ArtDiffuser® Model C and the Aeolian® Sound Diffuser.

While these two diffusers look very different, there are a fair amount of similarities between them.  Their physical size and depth allow them both to be great mid-frequency diffusers, but did you know that the Aeolian® started life as a blocky-looking diffuser – just like the Model C?  It’s true!

The mathematics behind the two diffusers is similar, but the implementation is different.  While the Model C retains its “blocky” appearance, the Aeolian has run through a mathematical process called “bicubic interpolation.”  Without turning this into a math-heavy post, if you take a “blocky” design like the Model C and run its geometry through bicubic interpolation, you get a “curvy” surface like the Aeolian® – It “smooths” the transition from one block to the next in a 3 dimensional matrix.

While they did not begin as identical geometries, they were similar in their height ratios – with the Aeolian® starting with fewer blocks in a more random distribution, and a slightly taller maximum height.  They both effect similar frequency ranges, with the Aeolian® going slightly lower and higher due to its depth and interpolated surface.  The pattern and type of the diffusion is also different because of the different geometries – the Model C has blocks, and the edges of those blocks introduce a great deal of edge “diffraction” – which is what happens when a wave interacts with an edge, or corner, of a surface. It bends and shears around the edge, which helps break up the continuity of the waveform, where the Aeolian® takes the approach of redirecting most of the energy off a randomized and continually-curved surface.

Aeolian® Diffuser array on the back wall of Big3 Studios.

It is important to note that the two are similar, yet different in their absorption numbers as well.  With the Aeolian® being deeper with a single large cavity, it provides a bit more absorption in the low frequencies than the Model C, which is a more rigid geometry containing smaller elements.  Depending on the space, this may be a useful addition to the diffusive properties.  While some spaces need the extra absorption, some are pretty well balanced already and are just looking to “sweeten” the sound a bit.

On the surface, they are both a nominal 2’x2′ square of thermoformed Class A plastic with lightly textured surface.  That is the extent of the visual similarities, and we cannot hide the aesthetic differences between the two devices. The ArtDiffusor® Model C is a “classic” diffuser.  Many have been looking at these for the better part of 3 decades now.  It’s a classic design at this point with no need for introduction – it is what the quintessential diffuser “looks” like.  In fact, when many people think of a diffuser – the Model C is what they visualize!  The Aeolian® is a modern rendition of the classic design. Using modern calculation techniques, we can now present the type of diffusion the Model C is famous for, in a different way.

While the two geometries look entirely different, and perform a bit differently, they have a common heritage as mathematical, 2-dimensional diffusers.  You could say that the Model C is the grandparent of the Aeolian®, and that pedigree has been passed on – having a similar foundation, but a different final interpretation.

This entry was posted on September 24, 2020, 10:51 am and is filed under Diffusion, Product Applications, Products, Uncategorized. You can follow any responses to this entry through RSS 2.0. Responses are currently closed, but you can trackback from your own site.