When Pippin Barnett contacted Acoustics First about an acoustical issue he was having with a new multipurpose space that was constructed for the Sabot School, he was in desperate need of a solution.  This space was needed for functions, activities, art displays, music classes, plays, and more, but was almost completely unusable due to the acoustics. 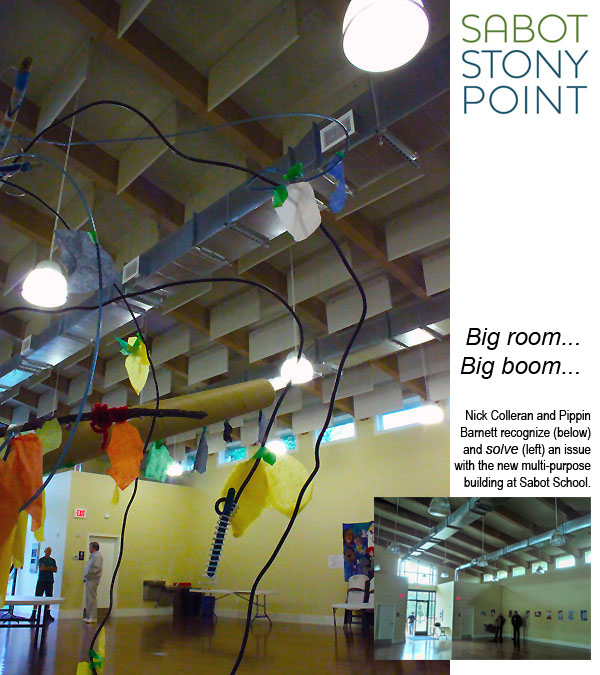 The large space was well conceived; large open floor plan, hydraulic door to open the space to the courtyard, bathrooms, storage and lots of display space for the student’s artwork and creations.  The building was also efficiently constructed using SIPS (Structural Insulated Panel Systems), which created a grand open space with no support pillars. 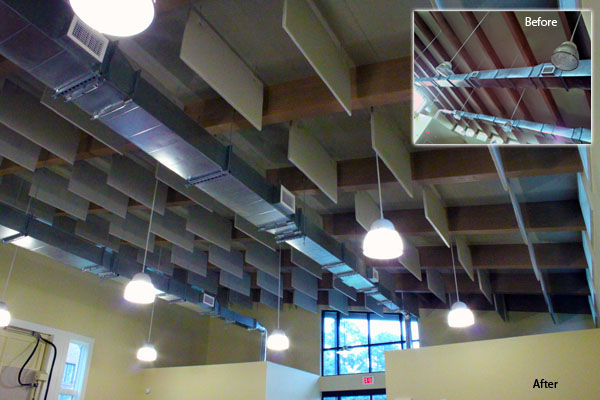 This space was ready to be used, but there was a problem – whenever they tried using the space, you couldn’t  understand what anyone was saying.  To say that the acoustics were “not optimal” is like saying that the destruction of the entire universe would be “inconvenient” – an incredible understatement.

Upon arrival, we took some physical measurements of the space to calculate the surface area and volume of the room, as well as got some acoustic measurements.

Click here for a balloon pop before acoustic treatment.

Whoa… Big Boom! What you are hearing is a 3+ second RT60 time;  That’s more than 3 seconds of time that the sound lingers in your space at a level audible enough to interfere with other sounds.

Which is “Inconvenient,” and “Not Optimal.”

So with some magic calculations performed by Joe Horner over at the quietest office in Acoustics First,(no really – he likes it really quiet,) a solution was developed to create a space that sounded as good as it looked. 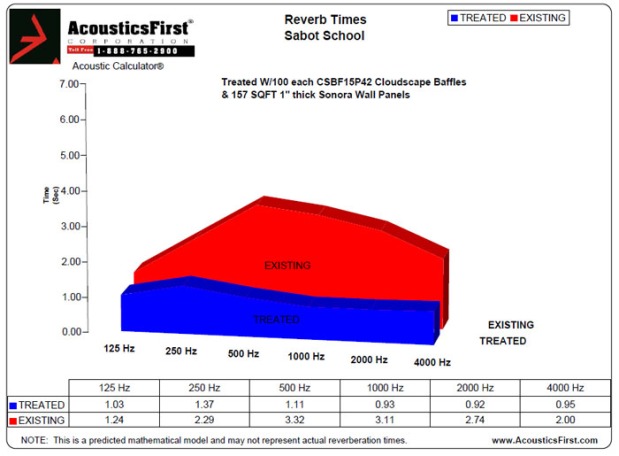 Joe prescribed 100 2’x4′ Cloudscape ceiling baffles as well as 157 sq ft of 1″ thick Sonora Wall panels to cover the solid hydraulic door – and we listen to Joe (he’s done this a lot!)

So, a short while later, the Baffles and Panels are installed and we receive an e-mail from Pippin…

“I’d say you were right on the money!”

Click here for a balloon pop after acoustic treatment.

RT60 from 3+ seconds down to right about 1 second. I’d say that’s right on the money too, Pippin!

The Sabot School regained the use of its space and everyone lived happily ever after.

This entry was posted on August 22, 2013, 9:48 am and is filed under Absorption, Art Galleries, Auditorium, Customer Feedback, Gymnasium, Multipurpose Rooms, Music Rehearsal Spaces, Products, School & Educational Facilities, Teaching Rooms. You can follow any responses to this entry through RSS 2.0. Responses are currently closed, but you can trackback from your own site.